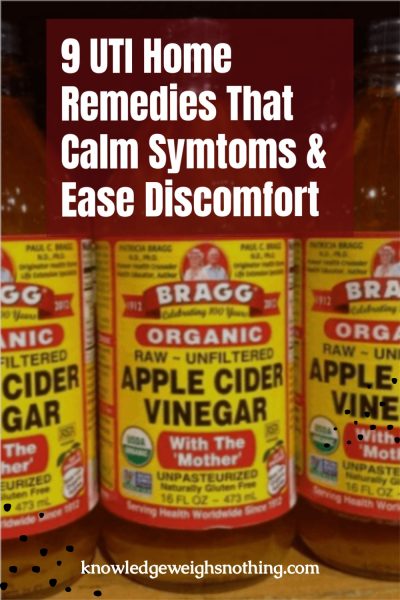 There are few situations that can be as uncomfortable as a urinary tract infection, more commonly referred to as a UTI. In the most fundamental sense, a UTI is an infection that afflicts the bladder, urethra, kidneys or ureters, causing pain, discomfort and a need to urinate, plus a burning sensation when urinating. Because any part of this essential elimination system can become infected, it’s important to utilize treatments capable of delving throughout each of these bodily parts. Since over 7 million people visit a physician for UTIs every year, it’s among the most common infections throughout the country.

If you’re searching for relief from a UTI, then you should immediately begin treatment. Although UTI home remedies can be an effective way to banish this painful infection, because of the risk associated with such an infection, it’s important to visit your physician should your symptoms worsen after self-treatment.

The following UTI home remedies were chosen due to its effectiveness at relieving the severity of symptoms (pain, discomfort and burning urination) and banishing the infection at the deepest parts. While these UTI home remedies are considered safe and effective, should your UTI symptoms worsen within one week of starting treatment, immediately visit your physician as you could be dealing with a potentially serious infection?

While this may seem too simple, drinking ample water is the most effective way to flush this vital bodily system to help calm symptoms and promote swift healing. As a general rule of thumb, drink half your body weight in ounces of water. For example, if you weigh 160 pounds, drink at least 80 ounces of purified water per day. While the act of urinating may be painful, avoiding ample hydration is the biggest mistake you can make when it comes to restoring your urinary tract health. One of the most uncomfortable symptoms of a UTI is the near-constant urge to urinate due to a burning sensation. An effective UTI home remedy involves drinking baking soda water to actually neutralize the acidity within the urine. Although baking soda does not actively eliminate the bacterial infection responsible for a UTI, it can reduce pain and burning sensations.

One of the major causes of UTI pain is inflammation caused by an active infection. One of the most potent UTI home remedies is ginger tea as it features unique anti-inflammatory properties. Its unique active compounds hinder a biological process known as prostaglandin synthesis. By blocking this process, the chemical messengers responsible for triggering inflammation and pain signals, inflammation is reduced and pain is numbed. In fact, this natural process is the same many synthetic medications try to accomplish.

The active compounds found in blueberries thwart UTI infections by disturbing the health of the bacteria that causes urinary tract infections. By affecting bacterial fimbria, its life cycle is shortened, which results in faster healing. The constituents found within apple cider vinegar make it one of the most effective UTI home remedies. Filled with a variety of enzymes, minerals and potassium, apple cider vinegar interacts with the bacteria responsible for the onset of a UTI. By inhibiting this bacteria from growing (or multiplying), you can experience swift healing and relief from painful symptoms.

One of the most effective ways to naturally banish a UTI is to increase your consumption of vitamin C. Indian Gooseberry, also known as Amla, inhibits the growth of UTI-causing bacteria due to its high vitamin C concentration.

The powerful antibacterial properties found within tea tree oil make it one of the most effective UTI home remedies. Unlike many other of the remedies listed, this method works through a topical treatment. Pineapple contains the enzyme ‘bromelain’ that has powerful anti-inflammatory properties

Considered one of the most beneficial UTI home remedies, the active compounds in pineapple are known to help reduce pain and symptoms of a urinary tract infection. The bulk of this fruit’s medicinal benefits is derived from an enzyme known as Bromelain. This enzyme features powerful anti-inflammatory properties, which actively works to reduce UTI symptoms. When combined with antibacterial herbs or medicines, pineapple helps to bring near-instant relief.

Uva Ursi consists of a variety of active compounds known to hold powerful antibacterial and antiseptic properties. Research has found this herb to be among the most effective natural UTI home remedies.

As stated above – these UTI home remedies can be very effective when used early, and for minor UTIs. However, if your symptoms continue or get worse, please visit your doctor right away for treatment and diagnosis.